Plastic on the tongue

Every time Martin Löder brushed his teeth, he was amazed at the white film that remained on his tongue. The environmental engineer already suspected what it was all about, but he wanted to know exactly.

He sifted the contents of his toothpaste tube through a fine mesh ten micrometers wide - that's just a hundredth of a millimeter - and examined the residue under a microscope. What he saw was plastic: "Wonderful, round plastic balls" is how Löder describes his discovery.

But what is plastic doing in toothpaste?

Plastic has a cleaning effect

Microplastic beads are found primarily in the peeling products of most cosmetic manufacturers. They ensure the cleansing effect and should remove small flakes of skin as gently as possible. The plastic balls are soft and for this reason they are also added to toothpastes. Because they clean without attacking the tooth enamel. Microplastics are also found in most lipsticks, mascara and make-up.

If you study the ingredients of your shower peeling, make-up or toothpaste, you will often come across terms such as polyethylene (PE) or polypropylene (PP). It's nothing but plastic. In addition, the Bund für Umwelt und Naturschutz Deutschland e.V. (BUND) published a list of manufacturer names and their products in which microplastics could be detected. 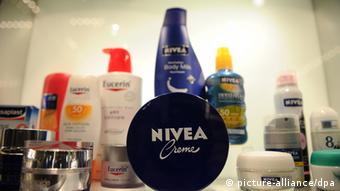 So plastic in cosmetics is no secret. Even so, the cosmetic companies themselves are reluctant to talk about the subject. Interview requests from DW were repeatedly rejected.

However, many companies refer to their plans to develop alternatives to microplastics and to "gradually convert" production. L´Oréal, for example, wants to have the plastic replaced by 2017, as the DW press spokeswoman said in writing. Also in a written statement, Beiersdorf AG - whose best-known brand is "Nivea" - assures that by the end of 2015 plastic will have disappeared from all products.

It's about more than just cosmetics: the plastic gets into rivers and ultimately into the oceans via wastewater.

Microplastics in the North and Baltic Seas

In the North and Baltic Seas, Martin Löder fishes the mini-particles out of the water. The environmental engineer has been working in the "Microplast" project since 2011 and researches microplastic pollution in the North and Baltic Seas. His research is co-financed by the Federal Ministry of Education and Research (BMBF), because politicians require reliable data before they issue any bans on microplastics.

For this reason, Martin Löder and his team filter up to 80,000 liters of water annually and take sediment samples at various measuring stations in the North and Baltic Seas. The "biological bycatch", especially plankton, is released with the help of enzymes so that the plastic remains on the filter. The sample is dried and then placed under a special microscope that can also identify tiny particles. All plastic particles that are smaller than five millimeters are considered microplastics; the smallest of them can no longer be seen with the naked eye.

Track down the plastic

Martin Löder's research team therefore works with so-called FTIR spectroscopy. An infrared beam is directed onto the sample under the microscope, causing the individual molecules of the plastic to vibrate. This rotation is characteristic of every plastic. With polypropylene, which is often used in cosmetics, the same movements can be measured every time. In this way, the substances can be reliably determined and identified as plastic.

The disadvantage of this method, however, is that only particles that are not smaller than five micrometers can be measured. "However, microplastic particles can be much smaller. There are practically no lower limits," explains Löder.

According to the environmental organization NABU, more than 20,000 tons of plastic waste end up in the North Sea every year, and over time it is ground into smaller and smaller particles. Löder is therefore certain that the microplastic concentration in the North Sea will increase in the coming years.

Microplastics in the ocean also have the side effect of attracting and binding pollutants in the water, such as pesticides and industrial chemicals, like a magnet. Fish and other marine animals therefore not only swallow plastic, but also a highly concentrated poison cocktail that ultimately ends up on our plate.

From April of this year, Löder and his team will also be working on some sewage treatment plants in Germany to find out whether and to what extent the plants can filter out the microplastics that have entered the wastewater through cosmetics and toothpaste. Other studies deal with the concentration of small plastic particles in fresh water, i.e. in lakes and rivers.

Wax and silica instead of plastic

"In two years at the latest, politicians should have enough data to make a decision," hopes Löder. For the researcher, however, it is already clear: "Microplastics have no place in the environment," because there are good alternatives.

Natural cosmetics companies like Weleda prove this. In your birch shower peeling, for example, wax balls provide the cleansing effect. In the toothpastes, besides Silicea (silica) and baking soda, calcium carbonate - a main component of limestone and marble - is used as a cleaning agent.

Frédéric Anklin, spokesman for Weleda, admits in an interview with DW that the exclusive use of natural raw materials makes manufacturing processes more complicated. The wax globules of the peeling have their melting point at 80 degrees. Less high temperatures have to be used than in conventional cosmetics production. "Gentler procedures are necessary," explains Anklin. But they have been prepared for that.

Martin Löder has also switched to a toothpaste with silica. He is happy to accept that he may now have to brush a little more carefully so as not to damage his tooth enamel. Brushing his teeth with plastic several times a day, on the other hand, is no longer an option for him.