Can we consider dinosaurs as animals? 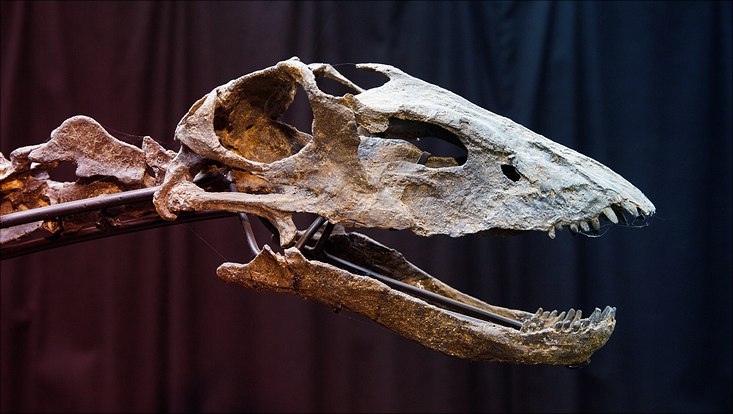 Is the Hamburg dinosaur group members of a real family, i.e. both parents and their cubs? Have young and old animals even lived together? And what did they feed on? At the beginning of the year, the Hagenbeck Foundation secured four complete skeletons of the recently discovered Suuwassea dinosaur for Hamburg, which are to be shown in cooperation with the Center for Natural History (CeNak) in the zoo - and hopefully later - in a new Hamburg natural history museum. Now the fossilized bones of the long-necked dinosaurs are being researched by the CeNak. An interview with evolutionary biologist and founding director Matthias Glaubrecht.

On the film "A dinosaur family for Hagenbeck", Hamburg Journal>

What do we know about these four dinosaurs so far?

Matthias Glaubrecht: The four 150 million year old skeletons from the Jurassic Period of the Mesozoic come from the Morrison Formation, in the northwest of the USA, in the state of Wyoming. The largest animal should have had a total body length of 15 meters. The fossils belong to animals of the herbivorous dinosaur genus Suuwassea and were excavated at the same site in 2009. From these findings, experts conclude that it could possibly even be a kind of family bond - which would be a scientific sensation.

Why is finding a possible family group so special?

Matthias Glaubrecht: Until the four skeletons were found, animal remains of the same dinosaurs as a group had never been found; mostly they are only single bones or skeletons of animals. The associated discovery of the young animal is extraordinary, which leads to new hypotheses regarding the rearing of herbivorous dinosaurs, the sauropods: So far, it has been assumed that dinosaurs, similar to sea turtles, either not at all or only for a short time after they have laid their eggs. like crocodiles, for example, taking care of their offspring.

What are the next steps? How are the dinosaur bones researched?

Matthias Glaubrecht: Last year we photogrammetrically scanned almost all of the original bones of the four Suuwaasea dinosaurs in high resolution. Now the already assembled skeletons are completely dismantled because they have to be “moved” after they have been bought by the foundation. The important large bones on which they stand can now also be scanned. These 3D scans should then help with the scientific research of the prehistoric animals and their breeding biology. So this is first of all an important basic determination of the bones themselves. Then we also want to investigate the circumstances of the embedding at the site in Wyoming more closely. And finally, the “Hamburg family” should be presented to visitors in Hamburg in a scientifically correct manner and in a contemporary exhibition.

How do you study the fossils?

Matthias Glaubrecht: First of all, it is about answering questions about the biography of the individual animals, i.e. examining the fine structure of their bones, for example, how quickly they grew, what they fed on, how the young and old animals lived. We want to use the field work to ensure that everyone actually lived together and died together at the same time and in the same way.

What makes the dinosaurs so interesting for you as an evolutionary biologist?

Matthias Glaubrecht: Although they were most likely extinct as a result of a large meteor strike, we must regard dinosaurs - contrary to their image of large, non-conformist animals that have therefore disappeared - as true models of evolution for success. These prehistoric animals have developed over 100 million years into one of the dominant animal groups of the Mesozoic. Similar to later mammals, which also existed at the time of the dinosaurs, they produced an enormous variety of shapes. And in doing so, adapted to their respective surroundings in a wide variety of ways before the great mass extinction occurred 66 million years ago. So we can observe the whole range of evolutionary processes in them, right down to their - feathered - descendants, today's birds.