Why do metals glow when heated

Why do metals only shine in red, yellow and white and not in the entire spectrum?

The blackbody emission spectrum at a range of temperatures is shown below. 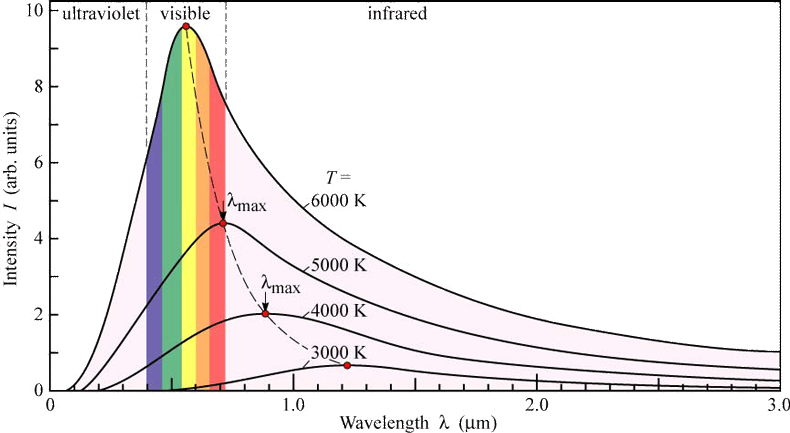 The colors shown in the graph illustrate the colors our eyes would perceive if illuminated by the range of wavelengths spanned by a particular color.

The brain interprets the information from the color receptors (cones) and you perceive a color that can sometimes be "unexpected".
For example, a combination of red and green light that the eye perceives as yellow.

At a temperature of 3000K. The vast majority of visible light that enters the eye is red, and therefore the object is considered red.

As the temperature rises, there is more red light, but also orange light, so the color of the object changes and turns from a dull red to a much brighter red.

At higher temperatures there is a larger range of wavelengths that stimulate the cones at a time, and it is because of this range that the color of the object moves towards white, not towards the individual colors that are emitted.
If you increase the temperature even further, as a result of which the proportions of the colors are approximately the same as the object, the object will look white.
At an even higher temperature, when it is very dangerous to look directly at the hot object due to the UV light that is also emitted, the white has a bluish tinge.

If you want to see a green hot object, you need to filter the red and blue ends of the light out of the object.

"As the temperature rises, there is more red light." Why is this happening? Shouldn't the number of photons corresponding to an energy greater than that of red (e.g. green) increase with increasing temperature, while the photons that represent red decrease? Shouldn't green "overwhelm" the red light so that we can see some green?

@Dieblitzen The point is that a whole range of wavelengths is emitted, as shown in the graph. Individual wavelengths are not seen, but an amalgam of an entire wavelength range. So there is no overwhelming green, but red and green.

Sure, there may be more green light than red, but the "more" is tiny. There is only about 20% more yellow light than red on the 600K line. We instinctively think that the visible spectrum is all there is to light up, but it's actually a tiny sliver of the entire EM spectrum. Take a look at @Farcher's graph to see how narrow the color bands are compared to the huge infrared strip on the right side of the graph.
<?