Change is always good for an organization

Organizations do not live indefinitely. The average life expectancy of a US company, for example, is currently around 10 years (see also study The Mortality of Companies). In its lifetime an organization goes through many processes of change, which can have one of two starting points:

The systematic handling of changes is called change management. If the change is a fundamental and permanent change, one often speaks of revolution (industrial revolution) or transformation (digital transformation, agile transformation).

ProTip: Always start with the why (see also Sinek, S .: Start With Why, video How great leaders inspire action): so that you have a clear goal in mind when starting an initiative to develop the organization and do not run after short-term fashions, it is important to to think carefully about the reason. Is there a good reason to change the organization? Does the reason come from outside (e.g. megatrends, Kondratiev cycles or social change)? Or is there an internal reason to want to change (e.g. digital transformation, agile transformation)?

As early as the 1960s, David Gleicher was concerned with the question of when change actually occurs in organizations and how big the chances of success of change initiatives are. He summarized the result in the formula for change (see also Formula for Change): 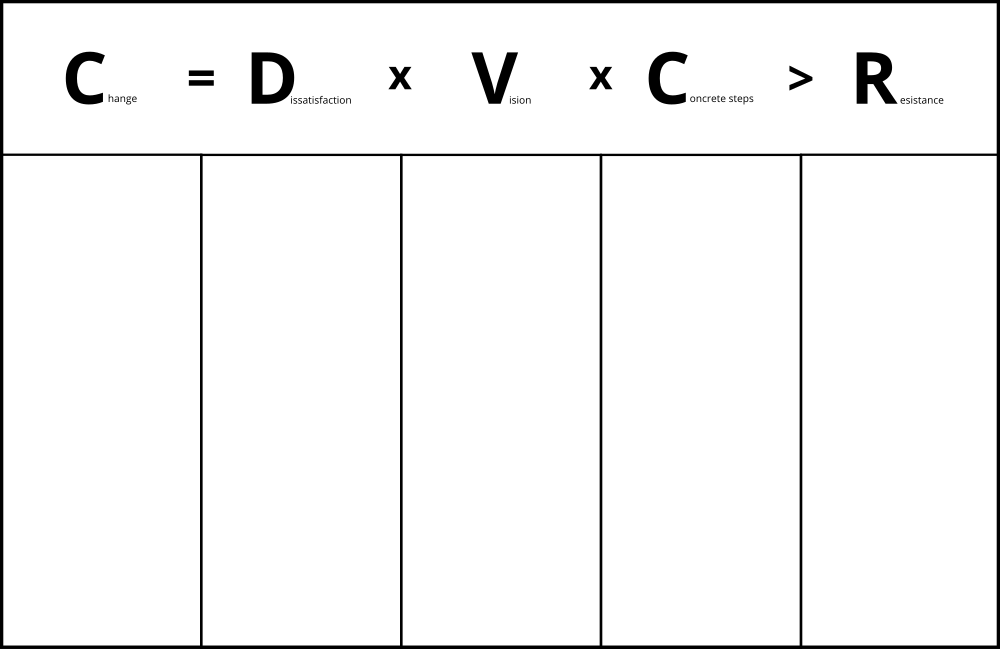 Change occurs when the product of dissatisfaction with the current situation (dissatisfaction), the vision of a positive future (vision) and concrete first steps towards a vision (first steps) is greater than the resistance to change ( Resistance). Since the core of the equation is a product, every factor with a value of 0 (e.g. lack of vision, complete satisfaction with the situation) leads to a standstill in the organization.

ProTip: The change formula can be used well in workshops to collect and evaluate concrete statements in a column under each letter (e.g. "What are we dissatisfied with?", "Where do we want to go?", "What concrete steps can we imagine ? "," What resistance do we have to expect? ").

When an organization changes, many intuitively think of the initiation of change from top management, the definition of the actual and target state and the use of so-called change agents to accompany the change. The change is usually completed within months or years. Many change measures, such as an organizational change or the introduction of software, can be managed with such an approach.

The 5 principles of the Dual Operating System:

The 8 accelerators of the Dual Operating System:

In addition to the change from the top of the hierarchy, the impulse for change can also come from below. In society one speaks of social movements (e.g. Occupy Wall Street, Fridays for Future), in organizations the term grass roots movement is often used (e.g. #gernperDu, Working Out Loud). What these movements have in common is that they consist of a group of people who use various strategies of mobilization and action to try to accelerate, prevent or reverse social or organizational change. According to Herbert Blumer (1969), a social movement goes through a five-stage life cycle from emergence to decline:

An overview of current grass roots movements in organizations can be found in the book Grass roots initiatives in companies: Without an order - with success! summarized by Sabine and Alexander Kluge (see also podcast Kluges from the middle).

The need to change faster and faster as an organization requires new approaches. Top-down approaches often do not generate the necessary willingness to change in terms of breadth, bottom-up approaches hit the proverbial "glass ceiling" and they run into the sand. In their book The Knowledge-Creating Company, Ikujiro Nonaka and Hirotaka Takeuchi described the Middle-Up-Down Management approach, which enables the rapid distribution of information and knowledge generation in an organization.

In contrast to the often cited "paralyzing middle management", they see especially specialists and executives at the middle levels as decisive actors in the change process. You can build the bridge between the visionary ideals of top management and the often chaotic realities of the frontline staff. A spiral-like movement is created in which the great vision is repeatedly reflected in the existing realities and iterative progress is created. 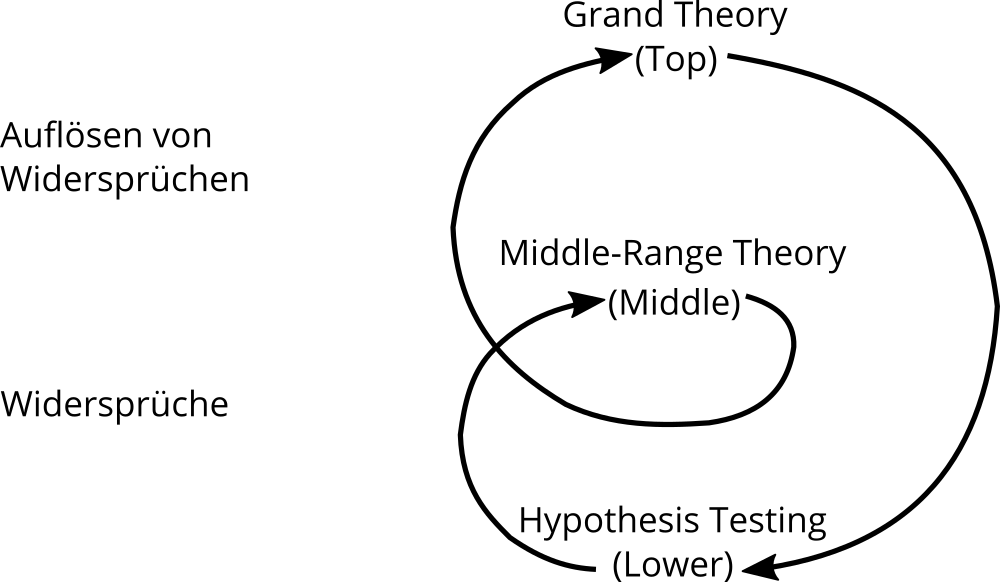 In change management there is the beautiful saying "Leading by example is not only a change method but the only one". Especially when the change project is about changing values ​​or behavior, all drivers of change must lead by example (role models, role models). Mahatma Ghandi sums up this approach to change well in this short quote:

Be the change you want to see in the world.

The video First Follower: Leadership Lessons from Dancing Guy shows the feeling that you have as the first driver of change: you feel like a "lone nut". It is important to find the first people to participate (first followers). Once these have been found, the core is created for a movement of change that can grow and scale on its own. Lugano Kihachi has that feeling in the video for the Continental GUIDE kick-off with "I'm not alone!" beautifully dressed in words. 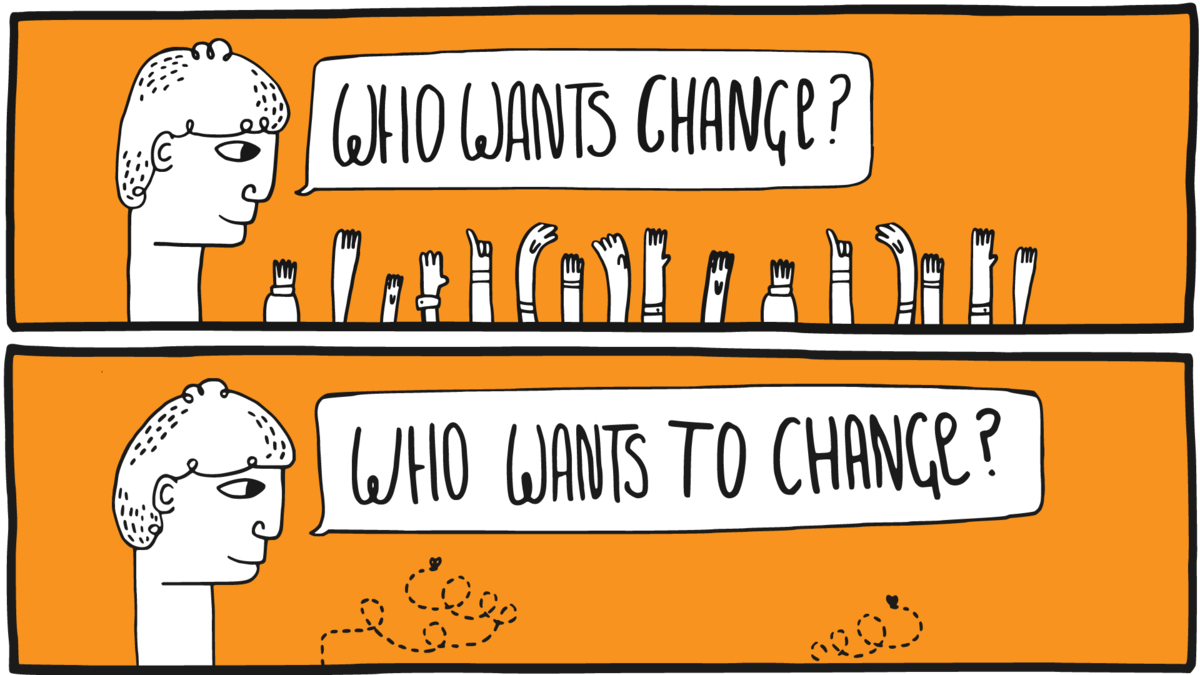