How did the Mayans make chocolate

Cocoa from the Aztecs and Mayans

The origin of cocoa is in Central America, in what is now Mexico, Guatemala and Honduras. The Aztecs and Mayans lived there. The ancestors of the Aztecs and the Mayans were already growing cocoa around the 4th century AD. The Aztecs prepared a real power drink, the "Xocolatl", from ground cocoa, seasoned with chilli, vanilla and honey. They used cocoa butter as medicine or cosmetics.

There are more recipes here.

Cocoa as a means of payment

Cocoa was already a valuable commodity in the Aztecs. It was not only used to prepare the "Xocolatl", but also as a means of payment. For example, the Aztecs had to pay part of their taxes with cocoa beans.

The Spaniards are coming 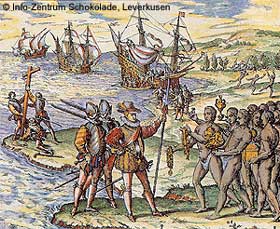 In 1502, Columbus, a conqueror in the service of the Spanish king, landed in America. While going ashore, he discovered cocoa beans in a market, which were sold there and served as a means of payment. The Spaniard Cortés brutally conquered the Aztec Empire from 1519 to 1522. He too only recognized the value of cocoa beans as a means of payment and had a large plantation built to "raise" money. The conquerors did not like the Aztec cocoa drink. It was Cortés who brought the first cocoa beans and the necessary equipment to prepare the "Xocolatl" to Spain. But even his compatriots couldn't get anything from the drink. Only later, when the Spaniards had the idea to prepare the cocoa drink with sugar and vanilla, did it become a great success.

Chocolate is becoming affordable for everyone

Chocolate remained a luxury good for the rich until the 19th century. It was only when machines for processing cocoa were invented and cocoa yields rose that other sections of the population could also afford chocolate. Numerous chocolate factories were founded in the 19th century, some of which still exist today. The manufacturers worked tirelessly to improve the quality of the chocolate. In 1848, an English company launched edible chocolate made from cocoa mass, cocoa butter and sugar for the first time. Until then, you could only drink chocolate.
Today chocolate comes in all shapes and flavors and every child can afford it. Germans in particular are real chocolate fans. In 2002, everyone ate an average of 8.2 kg of chocolate and chocolate products.
The partners on the chocolate side: