The pyramids of Giza seen from the south; in the foreground the three small queen pyramids, behind the pyramid of Mykerinos, in the middle that of Khafre and right the des Cheops ("Great Pyramid")

The Egyptian civilization began with the Predynastic Period. During this time, Upper Egypt and what is now Lower Egypt grew together and developed the Egyptian hieroglyphs. In the early dynastic epoch, Aha, the Thinite king, advanced from Upper to Lower Egypt and initiated the unification of the empire. He had a central administration set up in the new capital, Memphis. At the end of the first dynasty in 2780 BC Abydos, Hierakonpolis, Buto and Sais had developed as the spiritual centers of Egypt.

In the Old Kingdom from 2707 BC The construction of the pyramids began. The first, a step pyramid, was built by Pharaoh Djoser. He was buried under the pyramid. Pharaoh Sneferu, who lived around 2650 BC. ruled, expanded the empire to the west and south and had three monumental pyramids built, including the Red Pyramid in Daschur near Saqqara. 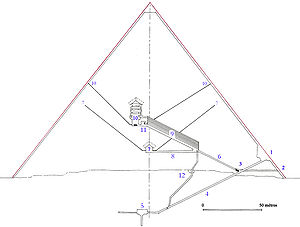 Cross-section through the Cheops pyramid:

The rulers Cheops, Chefren and Mykerinos built the pyramids of Giza. They originated between 2620 and 2500 BC. In the 4th dynasty. They were erected on a 1000 by 2000 m limestone plateau, whereby in addition to the construction of the pyramids, secondary pyramids, temples, burial grounds and workers' villages were created. No carts with wheels were used, as the Egyptians did not know the wheel at that time.

The largest and probably best known pyramid is that of Cheops. He ruled around 2620 to 2580 (2604 to 2581) BC. The Great Pyramid of Cheops[1] was originally 146.6 m high. This made it the tallest structure in the world for almost 4,000 years[2] It was built from around 3 million stone blocks, each weighing an average of 2.5 t, and was completely clad with limestone blocks. Inside is the Great Gallery, 8.5 m high and 47 m long. At the end of the gallery is the royal burial chamber. In it are the remains of a granite sarcophagus.

In the 4th dynasty the oldest still preserved dam (Sadd-el-Kafara) was built. The sun god re (also: Ra) became the most important deity of Egypt during this time. The Old Kingdom may have collapsed as a result of an Asian incursion into the delta or a famine.

in the Middle realm Amenemhet I promoted the cult Amun, advanced as far as Nubia and developed trade relations with Phenicia. With the invasion of the Hyksos in 1648 BC The Middle Kingdom fell apart.

in the New Kingdom (1550 BC to 1070 BC) Egypt reached its greatest position of power. It expanded its sphere of influence to the islands of Crete, Cyprus and the Cyclades and gained political control from Napata in Nubia to the Euphrates.

Amenophis IV. (Akhenaten) (around 1397-1380 BC) chose the newly built city of Akhet-Aton as the seat of government and led the worship Atons as the only one of God.

Under Tutankhamun the cult of Aton was again replaced by the worship of the traditional gods. His grave contained the most spectacular grave finds in Egypt. Ramses II successfully fought the Hittites. But under the 19th dynasty, around 1186 BC, it disintegrated. Also the new kingdom.

Assyrians and Persians as well as Macedonian Greeks occupied the country. In the 25th Dynasty, even the despised Nubians or Cushites rule the Nile state. Alexander the Great then established Greek rule. After his death, Ptolemy I made Alexandria the new capital. After the Battle of Actium, 31 BC. BC, Egypt became a Roman province.